The idea that children can be involved into the extremist terrorism of the IS (Islamic State) is horrific. Apart from being victims of bombing attacks on all fronts, children also play an essential role in the ideological war against the West because as a means of winning, propaganda is “more powerful than the nuclear bomb”. Last year, the US government has even identified the instant messaging and the counter-propaganda as two areas to be strengthened in the war against terror. The Caliphate’s propaganda is translated into many languages and diffused through various social media and hundreds of accounts and is consequently very effective. Not only is it based on a strategy of media terror, but it also stains the purity of children with fundamentalist Islamic radicalisation.

Child soldiers as an incitement to jihad

For some years the IS the propaganda strategy was based on the diffusion of distressing images of small children killed by the bombs of Western powers with some IS online magazines such as Dabiq or Rumiyah daily publishing pictures of the dead bodies of children either under the city or gathered timidly together so as to indignation.

U.S.-attacks in the regions of Mosul and Raqqa have been frequent in recent years and the images of dead, injured, and frightened children were also on occasion exploited to justify Islamic terrorism so as to gain support for the cause.  Irrespective of whether such images were true or false, they nonetheless incited more anger and disdain against Western nations. The objective is that whoever looks at such images will be motivated to resort to terrorist attacks and to join the cause of the Caliphate. The motivation for such terrorist attacks was that if Arab children are not safe, then Western children should also be unsafe. Consequently during recent years the preferred targets of the kamikaze have been shopping centres, dance clubs, and concerts where many children and young people were present.

The sister of Salman Abedi — the man who carried out the Manchester Arena bombing during Ariana Grande’s concert on 22 May 2017 killing 23people and injuring 250 including many children — believed that his motivation was one of vengeance as a consequence of the numerous images he had scene of murdered young Muslim children.

Camps for training and brainwashing child-soldiers

For some years now, the dissemination of IS propaganda was extended to include videos of children not only represented as the innocent victims of the Western air raids, but also as child-soldiers trained to retaliate against Western terror. One of the main reasons for the introduction of this strategy was to psychologically promote the Caliphate’s creation of a state where all adults and children are participants in the fight.

This has been particularly true in the Syrian and Iraqi regions conquered by the Islamic fundamentalists, where young schoolchildren were indoctrinated from a young age. As was the case at the time of European totalitarianism, Muslim children are primed to gradually accept socialisation and are rewarded – during public events with toys and candies — if they demonstrate acceptance of the Islamic State. While such acceptance may appear simple and harmless — including the waving of the Caliphate’s black flag – it is in reality a  “macabre little ice-cream lorry attracting young people to learn what the IS can offer”. Many of these child-soldiers are war orphans who join the IS because they have no other alternative. In creating this “small” army, the Caliphate militias also exploit the fact that young children more readily incorporate the social values they are taught. As a consequence, by living in such an environment, in which violence including decapitations are the order of the day, these children grow up with the conviction that the use of violence is the norm.

Furthermore, as the activists of “Raqqa were being slaughtered silently,” a group of journalists reporting on the Syrian war and the continuous violations of human rights, asserted that the IS “has also started a recruitment project of young fighters,” by opening training camps in the captured territories. Parents, coerced with food and money, are obliged to volunteer their children who in some cases, are even kidnapped. “There are at least ten of these camps” – adds Walid Hamid, a political activist from Deir Ezzor, a city in Eastern Syria  – and the “recruited forces of these camps are all younger than 18.” After training for couple of weeks, the child-soldiers are entrusted with missions of surveillance, espionage or delivering food, while the stronger amongst them are sent to the front-line or are in suicide attacks. In a video diffused in 2015 by the IS, in Palmyra a mass execution is made by children: jihad-soldiers who are visibly very young. In the picture you can see 25 boys with unmasked faces parading in front of the other militants in the midst of that city’s few historical remains. Standing in a In a row behind the prisoners, they without hesitation – as if it were an everyday occurrence — they draw their revolvers and shoot the prisoners in the head.

In most of the cases, as soon as these small fighters join the Islamic State’s army, they are left to fend for themselves because many families resign themselves to the fact that they have lost their children forever. And those who are able to get them back, have to face the difficult challenge — because of the religious indoctrination and brainwashing the child-soldiers have undergone — of reintegrating them into society. 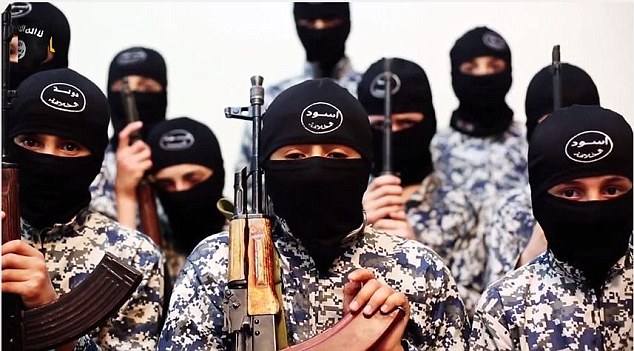 The new “small lions” of the Caliphate

The recruitment of child-soldiers is not a new practice and had already been used by Saddam Hussein in the late 1970s. The Ba’ath party who governed Iraq at that time had founded a kind of youth movement with a view creating a paramilitary organisation among children by means of military training and political indoctrination. Forty years later, the rationale is still the same: exploit those of a young age who are easily manipulated and parade them during public occasions in competitions that focused on the best fighters who would be part of the Islamic State’s army. These child-soldiers become part of an environment characterised by brutal practices and exposed daily to violence that serves to “desensitize them.” During their training, they are taught that executing the enemy is a privilege and an honour, almost an award. In one of the last videos published by the IS on 8 January 2017, “He made me alive with my own blood”, you can see a child who is about 3 years old shooting a disarmed man in the head, and another who is a bit older cutting the throat to a prisoner with a knife.

All these actions are filmed and disseminated by the social media so to extend the consensus about the Islamic State amongst adults who see that even children support it. With this kind of propaganda the IS tries to “normalise execution practises” by promoting the idea that the general public supports such executions. The IS primarily focusses on this new army of “lion cubs” – as they are called, to indicate their transformation from small animals into wild beasts – because Western armies hesitate to kill children. So the most terrific army ever becomes unconquerable. Again, the Caliphate shows the determination and atrocity of its message which even children cannot escape.

This site uses Akismet to reduce spam. Learn how your comment data is processed.

Behind the scenes of Silvia Romano’s release

Will Coronavirus survive the summer heat? Can the virus also be transmitted to humans through mosquitoes? We will try to answer

Some studies seem to agree that there is a link between Covid-19 mortality, pollution, and air quality

You can find out more about which cookies we are using or switch them off in settings.

This website uses cookies so that we can provide you with the best user experience possible. Cookie information is stored in your browser and performs functions such as recognising you when you return to our website and helping our team to understand which sections of the website you find most interesting and useful.

Strictly Necessary Cookie should be enabled at all times so that we can save your preferences for cookie settings.

If you disable this cookie, we will not be able to save your preferences. This means that every time you visit this website you will need to enable or disable cookies again.